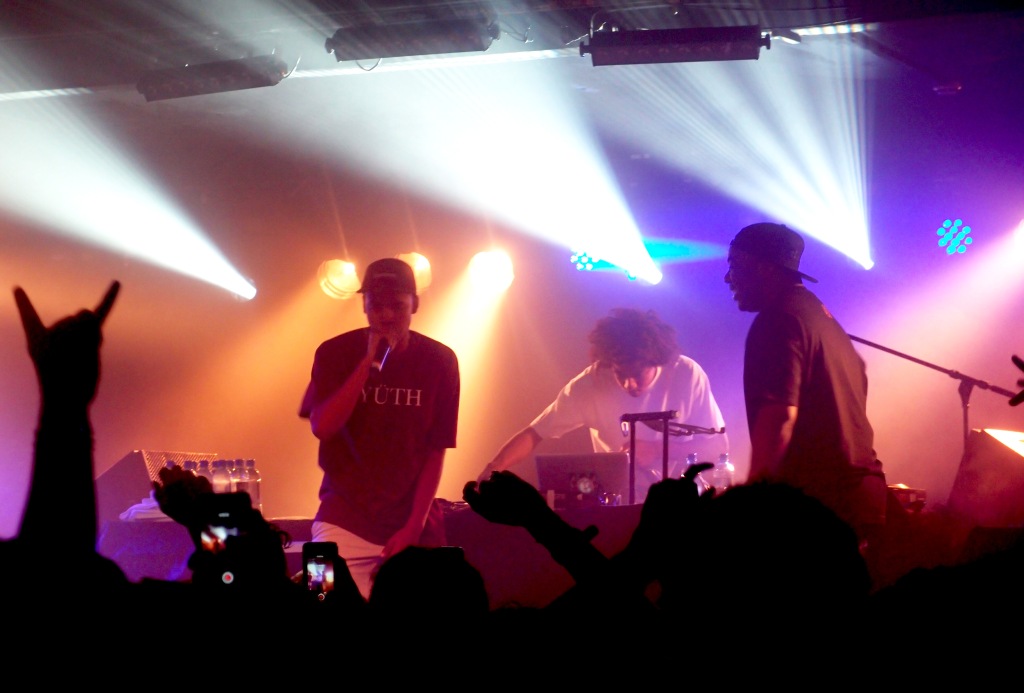 “Y’all ready to fuck with the kid?” Earl Sweatshirt strolls out onto the James Cabaret stage in Wellington. The masses are already hyped up from Danny Brown’s set prior, so they ignite again. There is something to be said about clever promoters who bring artists when they are peaking in their cycle. The energy is better; the excitement, rawer; the show — a ‘wild as fuck’ success.

Robin Fernando presents Run The Jewels, Danny Brown & Earl Sweatshirt was one of these shows. Off the back of the Laneways Festival, happy Wellingtonians who couldn’t mission to Auckland or take time off work were treated to hip hop acts currently in their prime. “The king of all side shows” boasted the Facebook event..but then it isn’t boasting if you deliver, and that they did.

Run The Jewels, made up of previously solo artists Killer Mike and El-P, are an uncanny pair. However, when their flows lock into the beat, especially when they performed ‘Run The Jewels’ and their DJ let loose, scratching, it was cold. “Thank you for letting us make a living as rappers,” El-P said.

“This has actually been a good show Wellington, we WILL be back.”

Danny Brown cruises on stage.“Hi. I’m Daniel.” He giggles. Oh my God. I heart this man. Gap toothed and frizzy haired, speaking with a slurr — he’s an indie-rap-God. ‘Other’ kids from all sorts of backgrounds were in house, turnt to the nines; eager to fuck with him. Performing tracks mainly off his latest album ‘Old’, it doesn’t surprise me that it was Danny Brown’s set that had me making a new friend that night, but not before fighting with him first:

Rapping ALL the words to DB’s tracks, something about my high tendency, to bounce my head, instead of jump up and down ruggedly, seriously irritated this fulla standing next to me. “Do you only know like five Danny Brown songs or something?” He yelled at me. I gave him a look like ‘fuck you’ and turned back to Danny. He kept going, but after one too many ‘bruh bruh’s’ yelled in my ear I finally asked this asshole what his problem was.

“Actually, my favourite song is Radio Song but he’s not going to play that tonight is he?”

‘Oh shit’. The look on his face flipped. “Is that really your favourite song?” He asked. I gave him a look like ‘SO’?!

“Nah, he won’t play that tonight,” he agreed.

“But do you want to know what the best verse is?” I ask…”His verse on Terrorist Threats with Ab Soul.”

Now we’re friends. As we bounced to DB, my new friend asks me to please understand he’d followed Danny to Laneways in Auckland and back down to Wellington (where he lives). “Look,” he shows me on his phone, “he even re-tweeted me.” After this, I don’t doubt that he is a huge fan, I’ll even say he’s a bigger fan than me. I definitely don’t know every verse and every ad-lib. He tells me more, “I’ve been surrounded by hipsters since yesterday…Fuck Hipsters! I even drove here from Laneways. And then you come and just stand in my spot..but XXX is the best album aye?”

Earl Sweatshirt. It’s safe to say New Zealand love Odd Future. ‘Earl Sweatshirt is just the man’ a 17-year-old who got caught lying about his age whilst using a fake ID told me after the show. “I mean I was keen to see Danny Brown, but my girlfriend’s like in love with Earl Sweatshirt.”

“Y’all motherfuckers know who I am?” Domo Genesis from Odd Future beams over his microphone. He has a good smile. The crowd were elated to see him— clearly they did. Looking down into the moshers from my rail, clusters of people below were sending smoke signals into the air; mixed in with sweat, it turned into condensation on the walls and ceiling, one of the homies mentioned he felt it drip onto his face. Errr. My friend and I followed the S O S seeming signals down into the mass of hipsters (shout outs to Tyler King). In real life, Earl Sweatshirt really does look like a young, old man — he’s not joking when he says so in interviews. His set was a showcase of where modern-day hip hop gets weird. But traditional hip hop heads and hipster fans were all there, together, getting down. If you were looking for an example of what the genre of Hip Hop is in 2014, this is it. Content wise, the music is still rugged and stereotypically ‘wrong’ and it poses the question, if y’all love this, then why don’t you love YG? As a crew, Odd Future have certainly nailed their market perfectly; with a few seasons of ‘nail’ left to keep banging on the head; it is their perfectly nonchalant, ‘C B F’ way of doing things which seems to have the youth enthralled. “Too black for the white kids and too white for the blacks, from honour role to cracking locks up off them bicycle racks,” Earl raps. He opens the door for EVERYONE to WANT to be at his show, allowing numbers to speak for themselves. Shout outs to Robin Fernando for making this happen. Shout outs to Laneways for having WDYFILWHH. Epic show.