“Sing when you’re winning, everyone has talents that present themselves early in childhood, for me, that talent was winning things off the radio,” — Esther Stephens, Watercooler, The Wireless.

In the air somewhere over the Tasman Sea, Esther Stephens sits mid-flight answering these questions. She’s on her way home from Melbourne to work on a theatre piece for the Christchurch Arts Festival in late August. Music was always going to be a part of her life, she explains it runs in her family and was fundamental like the sound the fridge makes when it’s regulating temperatures, it’s just there.

She says her band The Means — Abraham Kunin, Marika Hodgson, Tom Broome — had been collaborating for 10 years before their recent self-titled début release. Catch them tonight at Cassette Nine in Auckland with Average Rap Band, Team Dynamite and Groeni. “I’m particularly excited about the launch of Average Rap Band, no doubt those guys will kill it. Also Sound Select gigs always just goes off!” Stephens says.

How’s Melbourne been since you arrived…are you feeling the city?
I moved to Melbourne April Fools Day, 2012 – though it wasn’t a prank but a very deliberate decision! Melbourne is a mixed bag. The city has so much awesome stuff to offer in terms of socialising and hospitality, but I grew up in Auckland and I miss seeing the ocean! The Yarra is a bit of a poor substitute and I haven’t had much of a chance to get out and explore wider  Victoria. 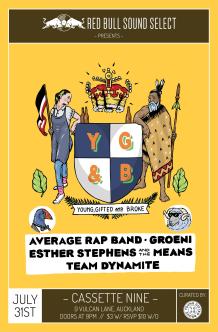 What was your motivation for moving to Melbourne.. do you feel it’s been worth it for your music, or even personally?
When I moved I was ready for a change of scene personally and professionally and Melbourne has provided that, though hilariously it seems like now I’m living in Australia, I’m working in NZ more than ever! Because the rest of the band are based in New Zealand our music is primarily focussed there, though we’re hoping to play some Aussie shows next year.

Do you have favourite spots to chill at yet?
Honestly if I’m not gigging I like chilling at home with my man. I’m away a lot working so it’s nice when we have stretches together. If I do go out there’s a great little cafe called Bluebird on Johnston St that we consider our local. It’s a pretty nice spot for a coffee in the sun.

Describe the influence Voodoo the album had on you and The Means, what was it about it that connected with the vibe you guys have?
Personally the things I admire about that album are the detail, the originality and the technical proficiency of the performances. These are all things we strive for in our work. Electronic/beat maker music is really having a moment and rightly so, but I guess you could say we’re traditionalist. We experimented, but have no loops or tracks or samples in our live performance. And being in a band with such crazy talented musicians it’d be stupid not to make the most of them!

What else do you do creatively other than sing?
I’m also an actor, which I love. I’ve done primarily screen work in recent years, but am currently (as I answer these questions!) flying home to NZ to work on a new theater piece for the Christchurch Arts Festival in late August.

“All my creative activities bleed into one another and feed each other.”

How does that all contribute to your aesthetic as an artist?
At around this point I often get asked ‘which do you love most, singing or acting?’ So I really appreciate this question as I feel like it takes a much better angle! Truth is that all my creative activities bleed into one another and feed each other. For example screen acting and singing in studio require similar skills, for example the ability to deliver finely nuanced performance (as you have a camera/mic up close), and the ability to occasionally repeat potent emotional content until you have the right take. Does this make me sound like a wanker?!!

What was happening in your world the day you decided music would be what you would pursue 100%?

I’ve always given my whole heart to the music I sing, if there was a catalyst for wanting to perform I’d say getting a copy of The Miseducation of Lauryn Hill when I was 13. Music is a very old friend and it runs in my family, it was inevitable I would have something to do with it. As for pursuing music, I think it’s more about doing your best to put yourself in the right place at the right time and being ready for opportunities when they arrive.

What do you appreciate most about what Red Bull does for local music?
Red Bull has become a musical institution not just in NZ but globally, their professional support has been invaluable to us. I really admire how committed they are to promoting new artists they believe in, who may not have the network to promote themselves. The Red Bull team are certainly masters of the modern social media universe!

What was happening in your world or growth when you wrote “sometimes it feels like you forget, I am the light in you… I’ll be the light in you… I am the life in you…” in the Light In You?
Light In You is in essence about feeling unacknowledged. It was an expression of everything I couldn’t say directly to my partner at the time. It’s my Joni Mitchell ‘Got Till It’s Gone’. It sounds empowered, but it was written from a fragile, angry space.

What can people look out for next from Esther Stephens?
Our vid for ‘Light In You is released, and our album is out on Bandcamp. There’s a bit more acting work on the cards for me, and everyone in the band is in high demand touring and playing for other shows/bands so it’ll be a busy spring, and then we’ll come together again for some Summer gigs.

What is your favourite song to cover right now?
‘I Idolize You’ by Ike & Tina Turner.